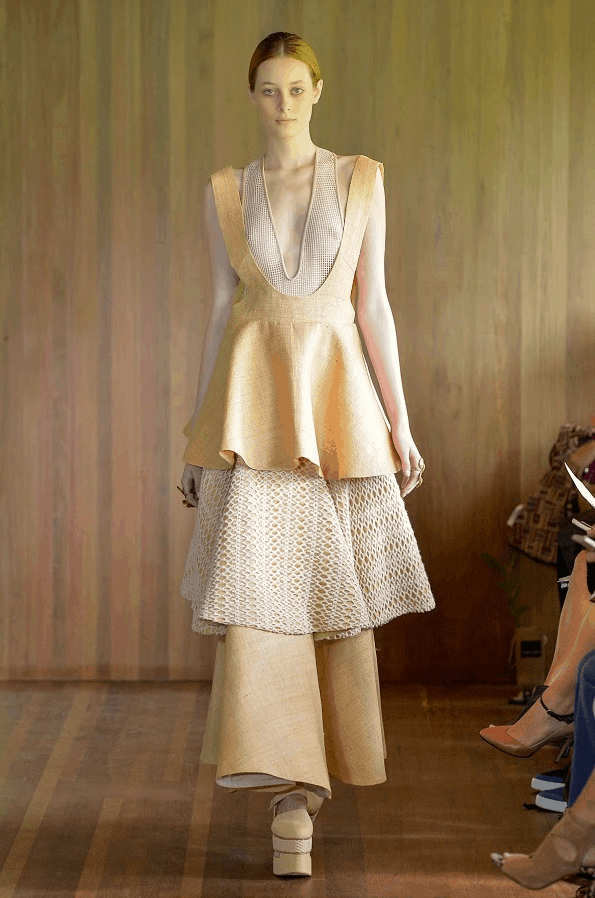 It’s a sunny and warm morning in early April 2014 when the international press van that carries me arrives at a wide and leafy street in the exclusive and affluent neighbourhood of Jardim Europa in São Paulo. As we park, I gather my thoughts and put away my briefing papers on Brazilian fashion designer Paula Raia, whose Spring/Summer 2014/15 womenswear collection I have been invited to see in the form of a runway show staged in her own home. Further down the street, a slowly moving line of black cars with tinted windows breaks its processional pace each time a driver stops outside a large house and doors are open to elegant and beautifully-dressed women who greet each other before being ushered in small groups past the gates and inside the house by a bevy of security guards. The minor commotion draws the attention of a few gardeners and maids who try to find out what all the fuss is about from the top of the walled electric fences that surround the neighbouring low-rise architect-designed villas where they work.

The decision to host a runway show in your own home is a brave and yet challenging one on more levels than one can fathom when first contemplating the idea. Technical imperatives aside (good examples including the light and acoustics of any domestic space, which are, ironically enough, not the most suitable to bring out the best in garments), combining personal and familial life with public and professional realms in the same space is not always a good idea. This is particularly true of events that present the finished work made by an artist or fashion designer that, in such contexts, are often accompanied by a build-up of preconceived considerations about the creative influence and process to an audience of friends, relatives, and complete strangers such as journalists and photographers. However, in the case of the event that unveiled Paula Raia’s Spring/Summer 2014/15 creations, the challenge was accepted, resolved and accomplished with undisputable aplomb at all levels to the benefit of the display of one of the best collections presented during the latest edition of São Paulo Fashion Week.

Designed by celebrated Brazilian architect Isay Weinfeld, Raia’s house is a rare peaceful and green oasis in the centre of a city of towering concrete blocks that house a metropolitan population currently exceeding 20 million people. After taking my seat to watch the show in a room with limestone floors and a wood-panelled central wall surrounded by wide glass sliding windows, I paused to observe the lush garden surrounding the house and the elements that, only after the show, I realised had undoubtedly influenced Paula Raia when developing her collection’s identity: a carefully manicured grass lawn framed a discreet swimming pool designed to look like a natural lake, and a couple of majestic wide and tall trees stood on grounds adjusted across generations around their longstanding existence, in a reverence to nature adroitly illustrated by Raia in her latest fashion range.

Finding inspiration in the universal idea of woman as a resilient tree (and in the indigenous mythological traits that it acquired within Brazilian folklore), Paula Raia resorted to natural fabrics and handicraft techniques to create a collection that is also an empowering celebration of womanhood and motherhood. Hers is a woman stoically and pragmatically grounded to life who, like a tree firmly rooted to the earth, steadfastly battles forces of nature to stand tall and strong for her children (the branches that reach upwards and outwards as physical and metaphorical extended manifestations of body and soul). If the description of woman as a living plant deeply connected to the soil and nature could have resulted in a condescending and commonplace social construction of women, under Raia’s command it managed to straddle the sensitive social line that divides Brazilian women with delicate consideration.

To a soundtrack of African tribal chants (some of which are at the root of Brazil’s folklore music owing to the slave trade during the country’s colonial foundation by the Portuguese in the 16th century), the models descended through a sculptural spiral staircase on the outside of the house and walked in and through two connected large rooms. The result was a parade of 22 looks presented in a gentle cadence through a gradient colour palette of earthy tones ranging from off-white and ecru to straw and ochre in textured natural fabrics such as raffia and straw, as well as in woven silk and cotton organza in some cases meticulously layered to create patterns such as fish scales. 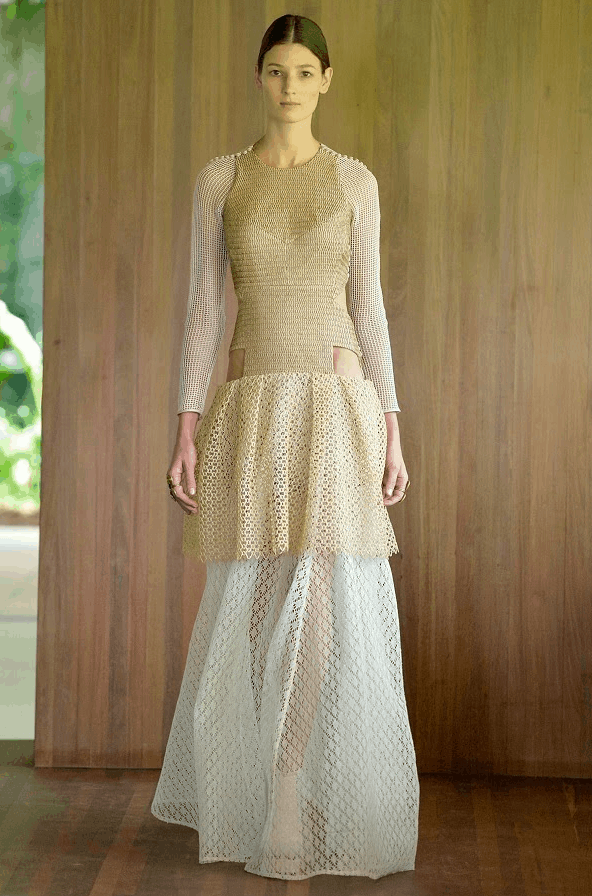 Elongated silhouettes were prevalent throughout the collection in the form of floor-length column skirts and dresses with sharp angular designs crafted around the shoulder lines. In a number of dresses, stacked layers of contrasting fabrics conjured the geometric designs that were made popular in the fashion and architecture of the 1930s as well as in the bulbous volumetries of Christian Dior’s garments of the late 1940s. Nevertheless, if Raia’s conic structures and pleated details revealed influences of the New Look, they also benefitted from Raia’s own reinterpretation by replacing Dior’s heavy wools with the lightness of cotton lace and of woven or plaited straw. And as the last model exited the house wearing a fitted top made of geometrically layered blocks of ecru and ochre fabrics over a long flowing skirt, and stood in formation with the other models in the garden facing the audience through the glass walls, the sense of communion with nature as the anchoring concept for the collection could not have been reinforced any further.

After the show ended and I began to formulate questions about the collection in my head in case I was able to have a few minutes alone with Paula Raia, I realised how, in spite of all the commotion that always ensues a runway show, the designer remained serenely happy. As I waited my turn to speak to her, I noticed that Raia kept holding her two children’s hands and paid attention to everything they said or did, even when her attention was requested by several people for the most diverse reasons. And when her mother congratulated her by giving her a long, silent embrace with tears running down her face, I quickly came to the conclusion that interviewing her would have been a redundant exercise. Against a hectic and noisy scene, that dignified and unstudied emotional portrait of generational ties and family love had provided all the answers to my questions about the origins of Paula Raia’s confidence, professional reliance, and the foundations for the personal and social awareness of womanhood and motherhood that she so consummately distilled into her sartorial creations. 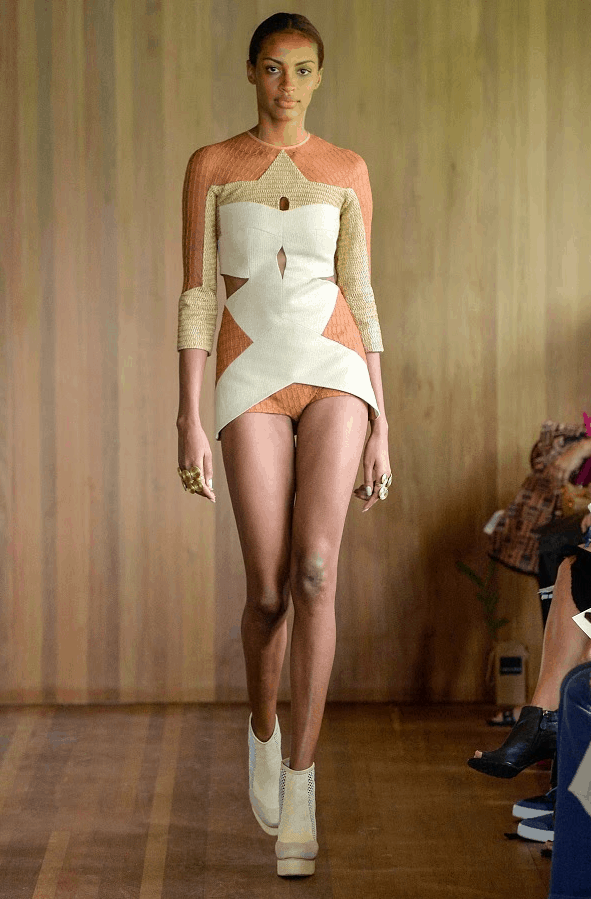 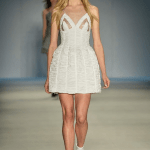