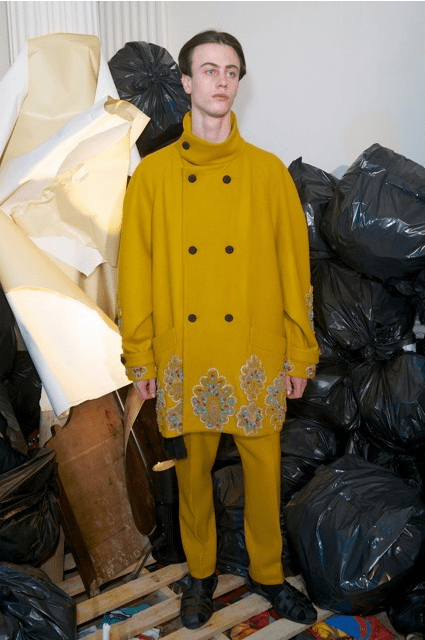 It is a firmly established axiom in fashion circles that an invitation to view a collection produced by fashion label Meadham Kirchhoff is one of the most coveted access permits during London Fashion Week. A young sartorial venture that has garnered a cult status amongst fashion editors rather swiftly, Meadham Kirchhoff has been seducing buyers and impressing critics with their beguiling collections since it was founded in 2006 by Edward Meadham and Benjamin Kirchhoff. The viewing of their menswear collection for Autumn/Winter 2013 (that took place on 7 January 2013, during the latest London Collections: Men showcase), which only allowed for a one-hour slot, made such an exclusive invitation even more desirable.

With academic backgrounds in womenswear (Meadham) and menswear (Kirchhoff), the duo decided to work together after graduating from London’s Central Saint Martins College of Art and Design. Their colourful and unexpected fashion presentations have caught the fashion world’s attention and have brought smiles to many who witnessed them (including the renownedly stone-faced editor-in-chief of US Vogue magazine Anna Wintour, whose temporary state of visible bonhomie during Meadham Kirchoff’s Spring/Summer 2010 womenswear runway show has been mentioned by fashion publications numerous times). In 2010, they won in the category Emerging Talent Ready-to-Wear at the British Fashion Awards and in June 2012 they showed their first menswear collection in London.

As with the presentation of its inaugural menswear collection, Meadham Kirchhoff’s designs for Autumn/Winter 2013 were displayed as a theatrical installation in two rooms of a neo-classical building in central London. After braving the queues outside the venue on a cold and dark afternoon and climbing several flights of stairs, guests arrived at the entrance to find a gloomy atmosphere: the darkened rooms were replete with black plastic bin liners as a cathartic metaphorical process of, as Meadham explained, “throwing away the shit of last year”, a period to which the designers waved goodbye in their credits notes with a blunt “2012: FUCK YOU”. The accompanying music matched the sombre mood by featuring the soundtrack of Hitchcock’s 1958 film Vertigo or an emotionally charged rendition of Jacques Brel’s 1959 song Ne Me Quitte Pas. Such was the background that enveloped the 14 models who stood still prostrated on the floor or standing on top of industrial wooden crates where candles had burnt down to the wick in an evocation of faded Regency grandeur. However, as one travelled through the rooms and examined the clothes, the darkness started to dissipate slowly. Contradicting their critics, Meadham Kirchhoff revealed, once again, a proficient knowledge of menswear history and techniques in a collection interspersed with subtle ironic details. This was an impressive second menswear range that blended Breton stripes, black vinyl shirts and overcoats with shawl neck white waistcoats or richly bejewelled thick wool coats in mustard, and allowed for glimpses of intelligent sartorial playfulness in the conscious slashing of white cotton fabrics that, on a close analysis, revealed extremely detailed embroideries.

On the surface, the presentation may have been one of loss and dejection; however, Meadham and Kirchhoff cannot hide their opulent creative talent and sartorial awareness so easily behind dark rooms and black garbage bags, even if that’s what they wish their viewers to perceive. If anything, the collection was a delicate testament of fashion’s role as an emotionally regenerative force and a confirmation that Meadham Kirchhoff is a label with much to offer in the realm of creativity. 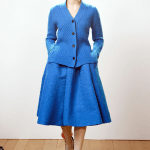