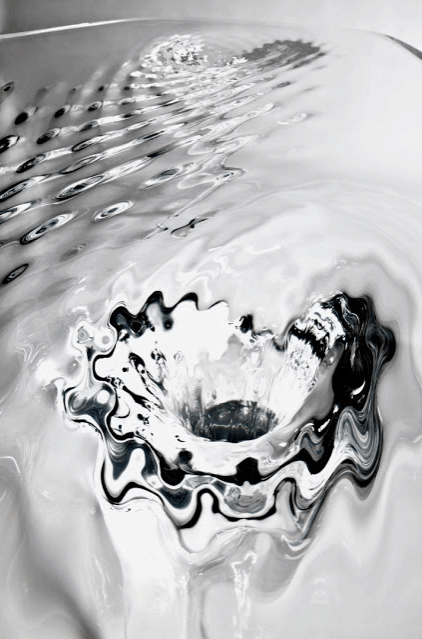 Architect Zaha Hadid has unveiled the Liquid Glacial series of tables at the inaugural exhibition for the new David Gill gallery in London’s St James.

The tables, which come in clear or in colour, resemble ice formations made from clear and coloured acrylic. The geometry of the flat table tops appears transformed from static to fluid by the subtle waves and ripples evident below the surface, which seem to pour from the horizontal through a vortex that forms the table legs. The transparent acrylic material, milled and hand-polished to create their finish, amplifies this perception, adding depth and complexity through a display of kaleidoscopic refractions. The result generates a surface dynamic that inherits a myriad of colours from its context and continually adapts with the observer’s changing viewpoint.

The tables represent Zaha Hadid’s application of her architectural process to the design of furniture. Known for pushing the boundaries of architecture and design, her fluid forms are informed by multiple perspectives in defiance of accepted ways of working in space. Hadid’s key architectural projects include the Rosenthal Centre for Contemporary Art in Cincinnati, the Phaeno Science Centre in Wolfsburg, Germany, the London Aquatics Centre for the 2012 Olympic Games, the National Museum of 21st Century Arts in Rome (MAXXI) and the Guangzhou Opera House in China. Hadid has lived in London since attending the Architectural Association in the 1970s. He work has been featured in several exhibitions worldwide and she has won numerous awards, including the Pritzker Prize, the Praemium Imperiale by the Japan Art Association, and the Stirling Prize by the Royal Institute of British Architects.